KPN demonstrates speed of the future over existing fiber network

We already knew that KPN’s fiber network makes superfast surfing at up to 1Gbps possible, but much faster speeds are in the offing. KPN demonstrated today at an animal clinic in Rotterdam that downloading and uploading at a speed of almost 20 gigabits per second can be achieved. As in many sectors, there is a need for higher speeds and greater data capacity at the Caressa Animal Hospital on Goudsesingel. Carrying out a speed test in collaboration with Nokia, KPN showed that the KPN fiber network is already suitable for very high speeds

Digital future
In particular, the test by KPN and Nokia shows what will be possible in the future. The maximum speed that customers can purchase at present is 1 gigabit. “At KPN we are doing our utmost to give everyone access to superfast internet, by laying a nationwide fiber network,” says Babak Fouladi, Chief Technology & Digital Officer and member of the KPN Board of Management. “The demonstration at the Caressa Animal Hospital shows that very high speeds are essential for the digital future of the Netherlands. I’m proud that we can make a contribution to achieving this with our superfast network.”

Veterinary medicine data-intensive
Veterinary medicine is a data-intensive sector in which internet connections and cloud solutions are playing an increasingly important role. “We would benefit right now from higher internet speeds,” says Mark Holtkamp, director ICT at IVC Evidensia Nederland, of which Caressa Animal Hospital is part. “Data is playing an ever more important role in medicine. Take MRI scans, for example. These are huge files for which we would really like to have a cloud solution, so that vets at various branches could assess scans. That would make us even more efficient and would ensure that the animals and their owners can get better and faster help.”

Fiber in Rotterdam
KPN is currently rolling out fiber rapidly in Rotterdam. “Fast connections are of great importance, both socially and economically,” says Rotterdam Alderman Maarten Struijvenberg, whose portfolio includes digitalization. “That’s why we’re happy that fiber is being laid in our city. It’s tremendous that the test shows that, with the very high speeds, the network is genuinely future-ready.” In Rotterdam 40,000 households are already using fiber. KPN is presently rolling out fiber in the Kralingen-Crooswijk and Hillegersberg-Schiebroek districts, as well as in the city center. This means that a further 25,000 households will soon be connected to the fiber network. The aim of KPN and the City of Rotterdam is to have 285,000 homes and businesses connected to the fiber network in 2025. In partnership with Glaspoort, the fiber company jointly owned by KPN and ABP, KPN has already laid fiber across 46 percent of the Netherlands, replacing the copper network. This makes the Netherlands the best fiber-connected country in Europa.

Standard PON fiber connection
The speed test was carried out on a standard PON fiber connection. PON is a modern and futureproof technology in which the fiber in the meter cabinet is connected to the telephone exchange via splitters. This makes very high speeds possible. Additional benefits are that the network consumes less energy and that less street furniture is needed because the splitters are generally buried underground. Using this technology the network can also be controlled remotely, so on-site visits by engineers are needed less often. KPN is currently laying fiber exclusively with PON technology. 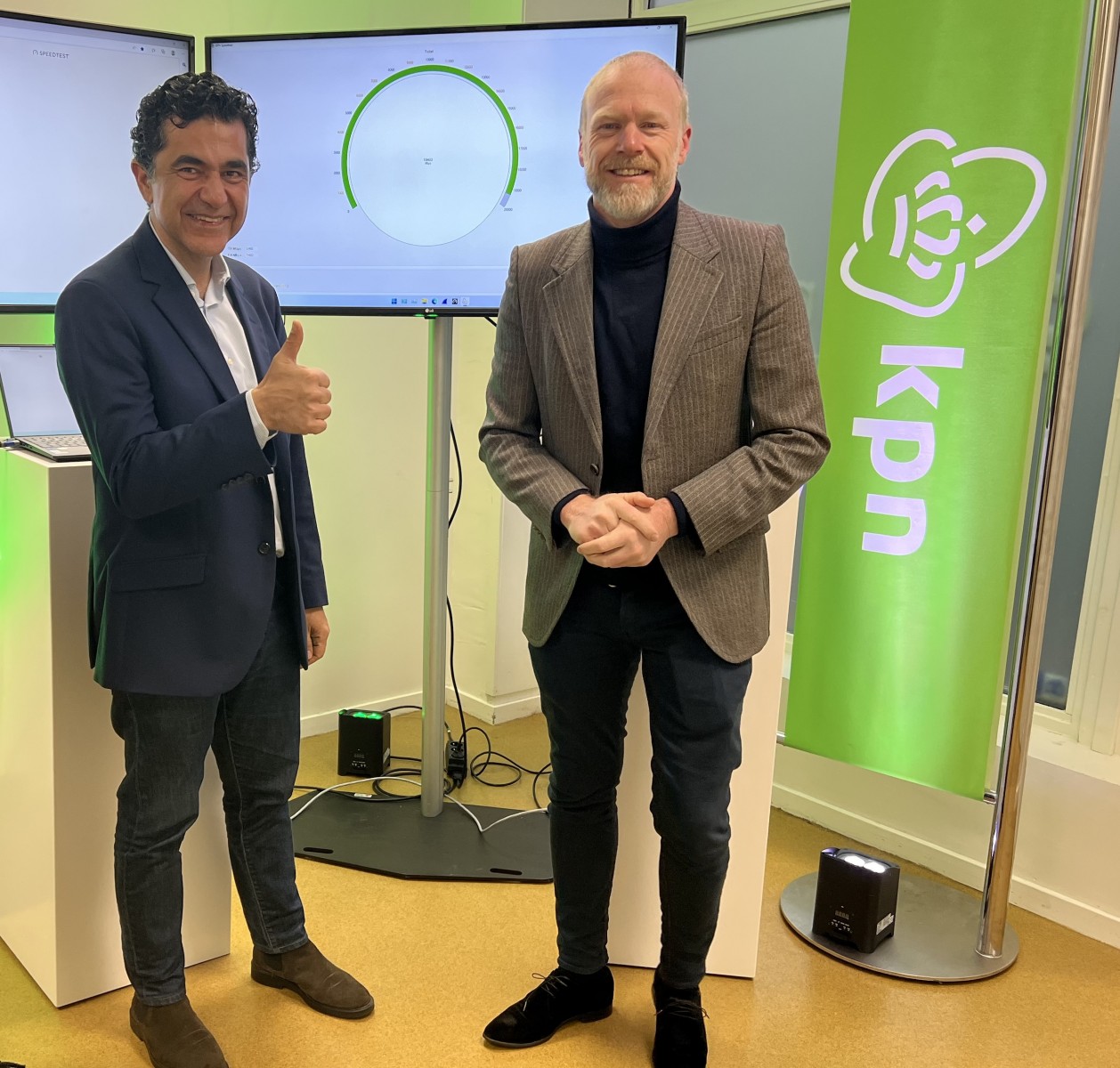 20 GS-PON
Speeds of 20 gigabit per seconds are now possible. Babak Fouladi and Joost Steltenpool (KPN Network) are delighted with this milestone.