Engineers from QuTech (a collaboration between TU Delft and TNO) can provide untappable communication that is cost-scaling to many users by using measurement-device independent (MDI) quantum key distribution (QKD). A notable side-feature is that, courtesy of Cisco, conventional internet operaltes in parallel, on the same optical fibre from Dutch telecom provider KPN. MDI-QKD is an important step towards an accessible quantum internet. 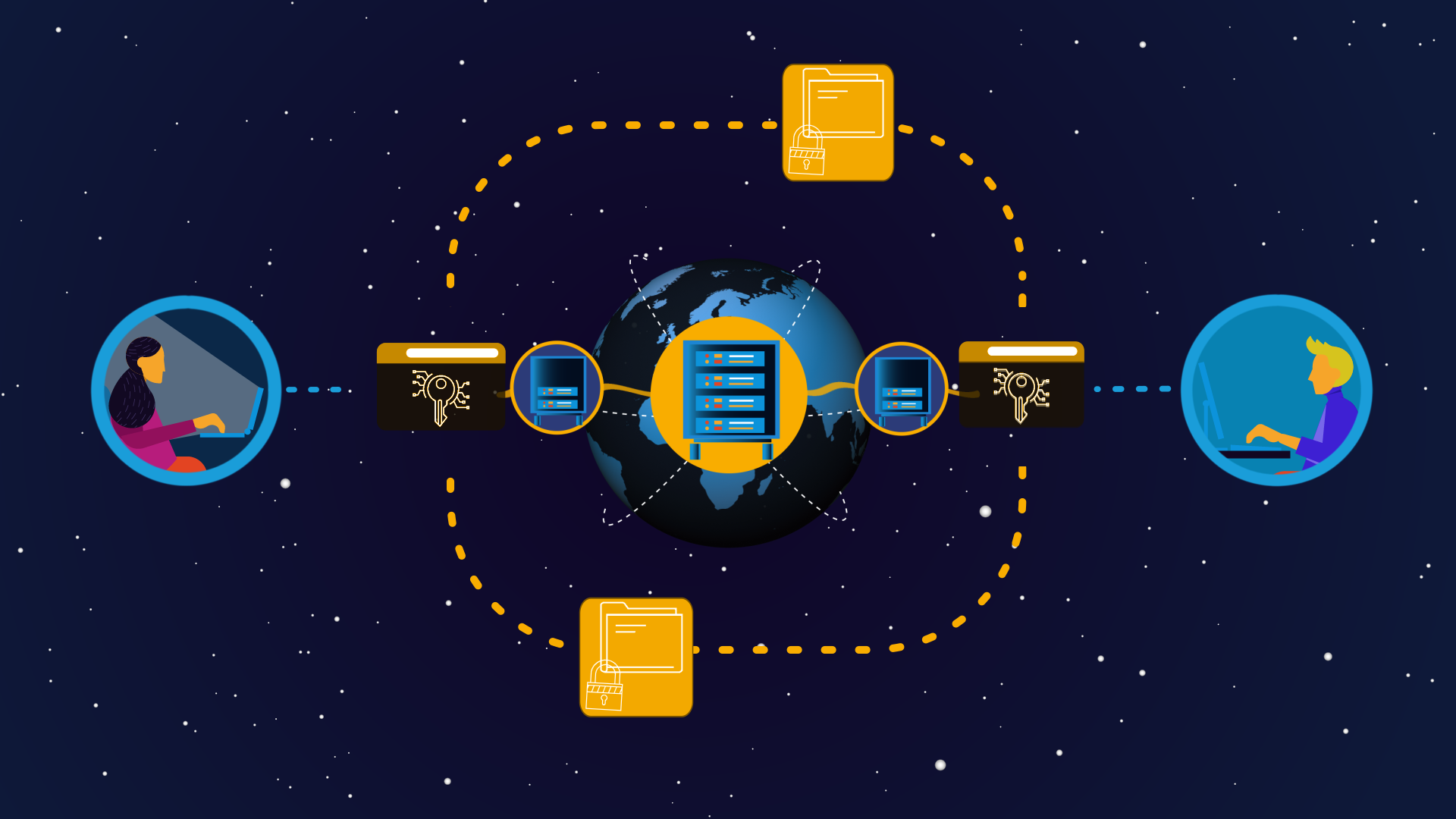 Image caption: Alice & Bob can use quantum keys to communicate and send files securely using an MDI-QKD key. Credit: QuTech (Vincent de Mees, Slim Plot). This image is an outtake of an animation on this MDI-QKD project.

Presently secure communication is based on the fact that breaking cryptography is slow using conventional computers. This includes communication between datacentres, inter-governmental communication, or critical infrastructure like banking, energy and airports. Some communication lines require secrecy by law or by the user. Any attacker could be recording these messages and then decrypting them later. Unfortunately, computers are becoming faster, even more so with the impending introduction of quantum computers.

Ultimate defence against eavesdropping
Joshua Slater, team lead of the MDI-QKD project: “Important conventional cryptographic methods rely on, for example, a public and a private key. These two keys are essentially two large numbers that belong together. Their security is based on the fact that the private key is difficult and slow to calculate with knowledge of only the public key. Unfortunately, with the introduction of very powerful computers (such as quantum computers), calculating the private key becomes trivially easy and then encryption can become insecure” 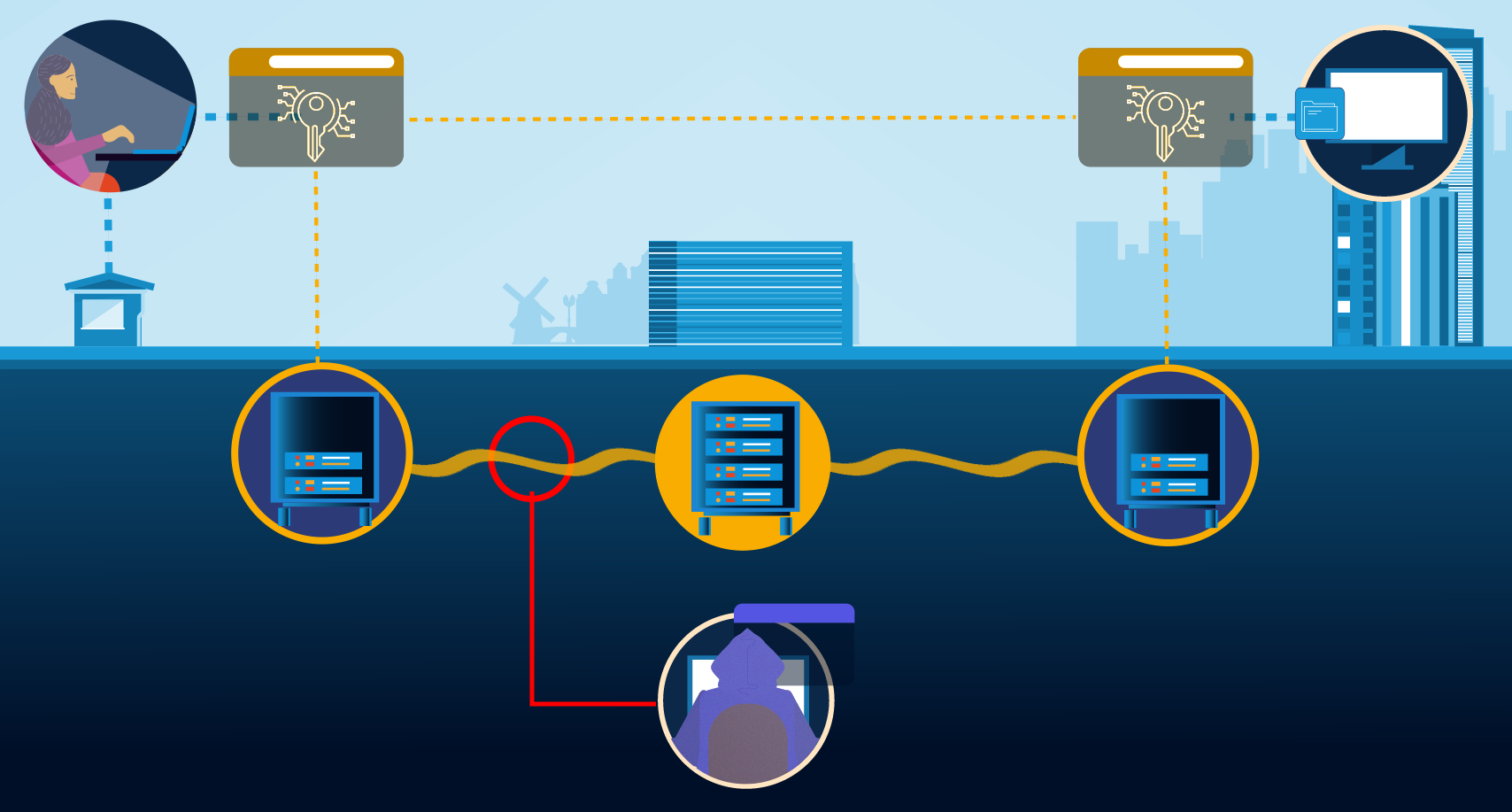 Image caption: Because of the quantum key distribution (QKD) used by Alice & her bank, a hacker cannot eavesdrop on them. Also, the central node doesn't have to be trusted for Alice & her bank to communicate securely. Credit: QuTech (Vincent de Mees, Slim Plot). This image is an outtake of an animation on this MDI-QKD project.

“Unfortunately, current commercially available QKD systems are difficult to scale in a network,” Slater explained. “To solve all these problems, we’ve built a measurement-device independent (MDI) QKD system, in which multiple users can be connected via a central node that operates like a typical telephone switch board operator. Importantly, the central node does not need to be trusted. The entire system is designed such that hacking attacks against the central node cannot break the security of the protocol.”

Image caption: Because of the measurement-device independent (MDI) system the whole network is rather easy to scale up to many users. Credit: QuTech (Vincent de Mees, Slim Plot). This image is an outtake of an animation on this MDI-QKD project.

“A significant achievement that we’re demonstrating here for the first time, is that our quantum signals are transmitted over the same fibre as conventional internet traffic,” said Slater. “Using standard equipment that Cisco supplied and configured with us, we established two multiplexed internet networks between the locations over the same optical fibres. The existence of these two networks do not impact the performance of our quantum system. Essentially, we’ve shown how our systems can coexist, in parallel”

“This is an important development in guaranteeing the security of internet traffic in the future,” said Babak Fouladi, Chief Digital and Technology Officer and member of the Executive Board at KPN. “I am pleased that we can contribute towards making this insight practical using the network of the Netherlands. Solutions like MDI-QKD should not only protect users today, but also make communication as future-proof as possible.”

Demonstration in Delft–Rijswijk–The Hague
The current system consists of three standard telco racks, each in a different city in the Netherlands. The first 'user' connected to the demo setup is code-named Alice and resides in Delft. The second user, called Bob, sits in a KPN building in The Hague. The central node, Charlie, is located in between. Every user is connected to the centre node by a standard optical fibre. Furthermore, the users and the central node are able to communicate over the normal internet, either directly via the (same) optical fibre, or indirectly via any internet connection.

Image caption: Alice is a standard telco rack located at the Delft University of Technology (the Netherlands),
the central node in a neighbouring city Rijswijk, and Bob is at KPN in The Hague. Credit: QuTech (Vincent de Mees, Slim Plot). This image is an outtake of an animation on this MDI-QKD project.

Finally, the MDI-QKD deployment represents an important step towards a future quantum internet. The network is designed to be upgradable in the future: users like Alice and Bob can upgrade their functionality (with e.g. quantum processors, quantum repeaters, quantum entanglement, quantum memory, quantum computers, whatever), while the central node and the rest of the network remains the same. The network is future-proof and ready to be upgraded for the quantum future.

“This is a great milestone, and an important foundation for the deployment of a national quantum network infrastructure in the Netherlands. That is one of the main goals of the Netherlands’ National Agenda Quantum Technology, which is being executed by Quantum Delta NL,” said Jesse Robbers, director of Quantum Delta NL—which received €615 million from the Dutch government in April of this year.

Fourth quarter and annual results 2022
'Gold' for best mobile network in the Netherlands
“Cybersecurity remains a major challenge, which you can only tackle together”
"iot has become an indispensable part of our existence"
KPN is launching the new way of watching TV: KPN TV+
Looking back on the jubilee year of KPN Mooiste Contact Fonds
Some modules are disabled because cookies are declined. Accept cookies to experience the full functionality of this page. Learn more
ACCEPT COOKIES
We use cookies to optimize the website, no personal information is stored. Learn more
DECLINE COOKIES ACCEPT COOKIES