Rotterdam, 10 November 2022 - In times when energy prices are rising sharply, saving on energy is more important than ever. Especially for a company like KPN where sustainability is an integral part of the strategy. That is why we are fully committed to accelerate further reductions in energy consumption. A company-wide action plan must ensure that energy consumption in the entire chain is reduced in the short term.

Several energy-efficient measures have been taken already. Such as energy-saving adjustments to the fixed and mobile networks and smart solutions for cooling and heating of technical buildings, shops and offices. KPN will also start generating sustainable energy on the roofs of approximately 150 of its own technical buildings over the next two years.

“In recent years, we have made significant progress in the field of sustainability. Since 2010, we have already saved 45% of absolute energy consumption, and we want to save an additional 10% on energy until 2030. At the same time, we expect data usage to continue to rise, about 27x more in the current decade. We therefore also want to further reduce the relative energy consumption per gigabyte sent over our network,” says Chris Figee, CFO at KPN. “We are also feeling the impact of the increased energy prices, and next year we expect an extra 50 to 60 million euros in energy costs. That’s why it relevant to speed up the process of smartly reducing our energy consumption, optimizing our energy efficiency and generating green electricity. So we can work towards the right energy at the right time in the short term, thereby avoiding as much as possible the use of gas or electricity in the energy grid.” 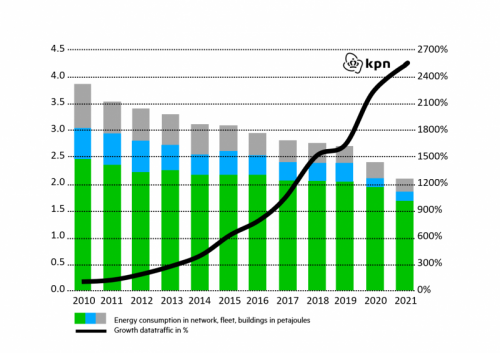 Fixed and mobile networks and IT
Since 2011, KPN has been using 100% green electricity and from 2015 its operations are completely climate neutral. Most of the energy is used for the networks and digital infrastructure. KPN is therefore adding more and more smart and energy-saving software features to the fixed network. In addition, each new generation is more energy efficient than the previous one. The switch from copper to fiber optic provides significant savings, especially when the copper network is switched off at 2.2 million addresses where fiber is already installed .

In the mobile network KPN is also focusing on further savings. The total energy consumption remains more or less the same, despite the continuous increase in data traffic. Thanks to the network modernization, the total capacity increases by 7.5 times, while the amount of energy per GB decreases by 86%. KPN has also activated a dynamic energy-saving mode on mobile masts when few people use the network at night. When the demand for data increases, the network switches back automatically.

KPN will also accelerate its rationalization in the IT infrastructure. This means that a number of smaller data centers can be shut down earlier than expected. A number of processes are also virtualized in small steps, which saves hardware and power. 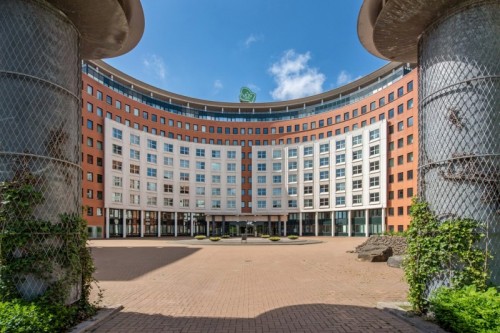 Office buildings, shops, technical buildings & power stations
KPN is also looking at how it can use the square meters of office space more efficiently. Since covid-19, the various office buildings have definitely been used less. As a result, the occupancy rate is also considerably lower and KPN is looking how office space can be arranged more efficiently and optimally in the future. Partly for this reason, the office workplaces in the The Hague region will be concentrated at one location from the beginning of next year; Zoetermeer. As a result, KPN can significantly reduce the energy bill at the Maanplein location. Even in case of a possible new tenant.

KPN is also taking a number of measures in various shops; for example an experiment to close shop doors as much as possible during opening hours, so as little energy as possible is lost. KPN has many technical buildings and network exchanges throughout the country. The energy consumption of these buildings is continuously monitored. For example, a number of buildings have been furnished in a more optimal way, so less heating or cooling is required. The settings of heating and cooling installations have also been adjusted, cooling corridors have been installed and gas consumption has been reduced. Several heating boilers have also been removed at hundreds of locations. And experiments with heat pumps are underway at a number of locations.

Renewable energy generation
KPN will start installing solar panels on technical buildings and power stations. Over the next two years, the roofs of 150 locations will be equipped with solar panels. These rooftop locations are technically suitable and also conveniently located, so in the coming years solar energy will have a greater share in KPN's total energy mix. 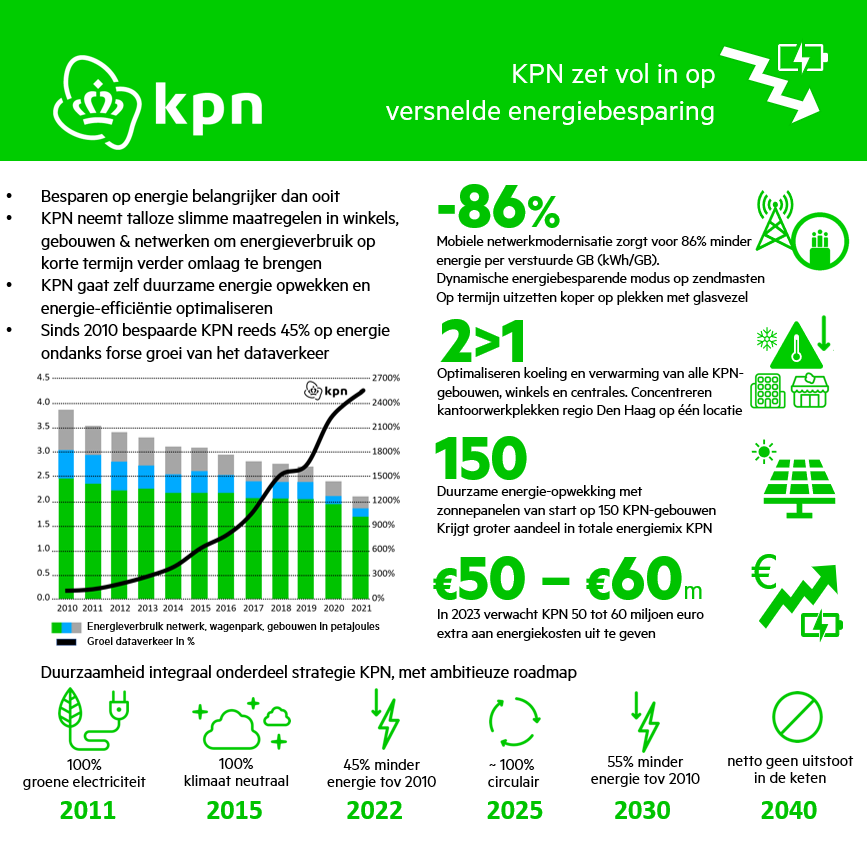