KPN strengthens position as the best mobile network in the Netherlands

KPN has further strengthened its leading position as the best mobile network of the Netherlands in the first half of 2022, according to independent analysis by Ookla®. Once again, users of the KPN network have on average the highest upload and download speeds and the best coverage. That is why KPN has been named the Netherlands’ Best Mobile Network for the fourth time in a row. And once again KPN is awarded Netherlands’ Fastest 5G Network. 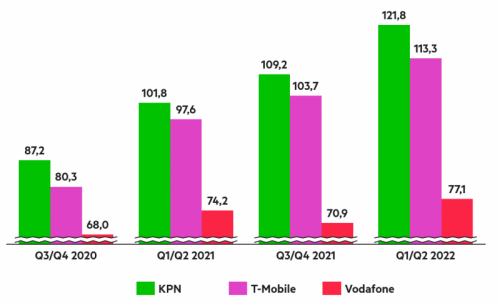 Ookla compared the average performance of more than 280,000 users of the three Dutch mobile networks from January to June this year. The Ookla Speed Score™, a performance index that looks at the combination of download and upload came out on 121.79. The average download and upload speed at KPN is respectively 122.05 Mbps and 17.87 Mbps. Customers with a 5G smartphone come out even higher and have an average of 191.51 Mbps down and 39.81 Mbps up.

Since the introduction of 5G two years ago, KPN has offered all its mobile subscribers the fastest 5G experience in the Netherlands. KPN now sees more than 1 million active users on the 5G network every day and this number is increasing every day. For this growing group of customers, the 5G experience has improved over the past two years. The 5G coverage has further increased and KPN has the biggest 5G-antenna footprint in the Netherlands.

“Of course we are very happy with the recognition for the performance of our mobile network, as several independent measurements have shown for two years now. The success of our mobile offering shows that  customers prefer KPN for its award-winning network," said Babak Fouladi, Chief Technology and Digital Officer at KPN. “Going forward, the mobile user experience and 5G will even get better, once the important 3.5 GHz spectrum becomes available.”

According to plan this 5G frequency band will be (partially) available at the end of 2023, after some years of delay. “From then, Dutch users will experience the next dimension of 5G; fiber speeds on the smartphone.” Fouladi urges to keep up the pace with the auction of this important 5G spectrum. “The availability of superfast 5G and the massive roll-out of fiber, will ultimately contribute to our ambition to make the Netherlands the best connected country in the world.”

About Ookla
Over the past six months, Ookla Speedtest® analyzed more than 280,000 samples from over 108,000 unique devices of users of the various Dutch mobile networks. Then Ookla reported who is showing the fastest mobile network speeds and how the mobile coverage is doing. KPN comes out on top for two years in a row, KPN also scored best in Q1/Q2 and Q3/Q4 of 2021, just like in Q3/Q4 of 2020.

KPN strengthens position as the best mobile network in the Netherlands