For the third time in a row Ookla® has recognized KPNs mobile network as the 'Best Mobile Network' in the country*. KPN comes out on top in terms of both coverage and speed. This is the result of more than 340,000 user tests over the second half of 2021 among the various Dutch mobile operators. 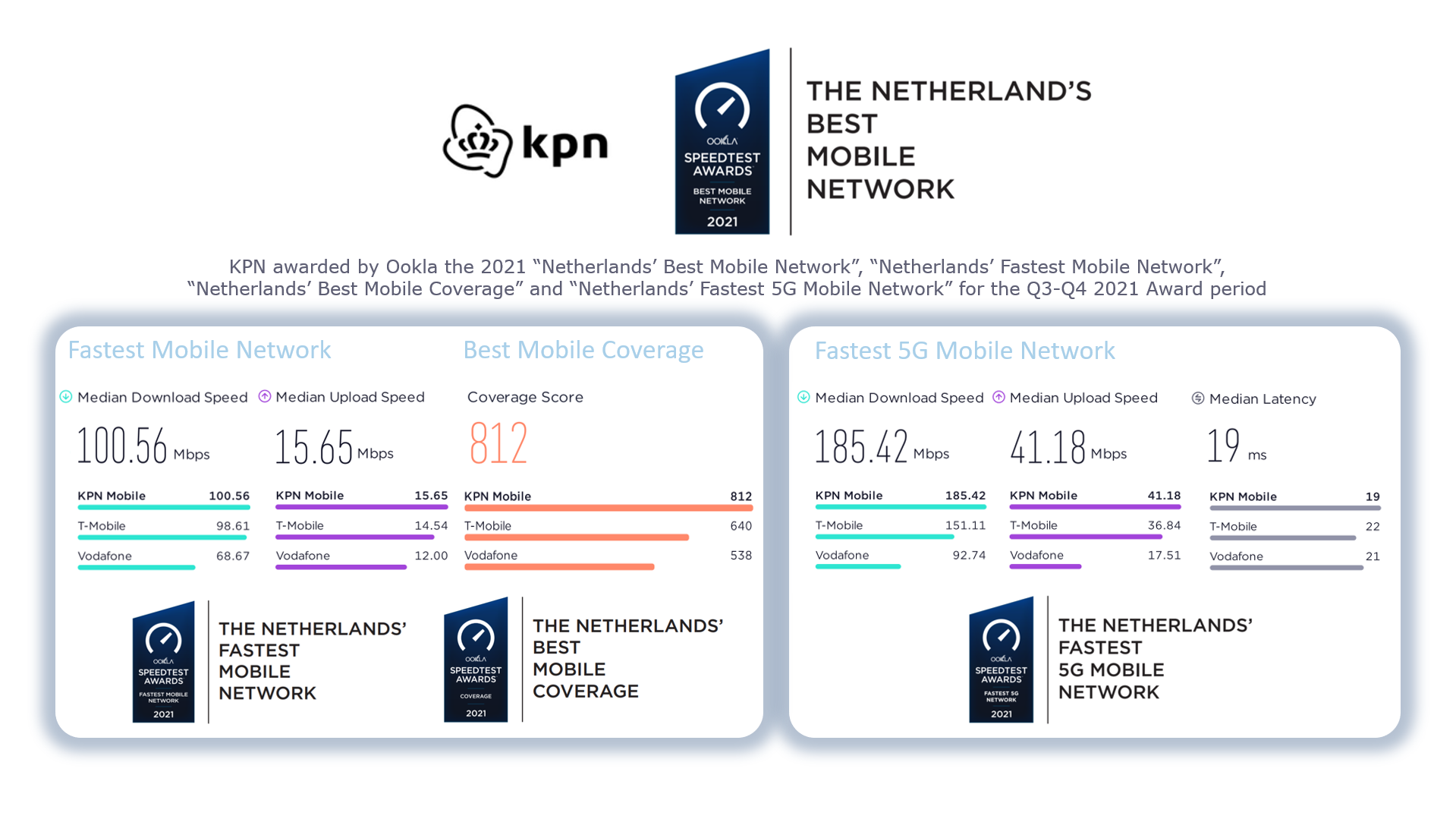 The median download and upload speed of the KPN mobile network in the second half of 2021 was 100.6 Mbps and 15.6 Mbps, respectively, and on 5G an average of 185 Mbps and 41 Mbps. This makes the network of KPN the best of all mobile operators in The Netherlands. Downloading a 1GB movie via the KPN 5G-network takes on average 43 seconds, while on other Dutch 5G networks it takes on average 10 to 40 seconds longer. According to Ookla, KPN also has the best mobile coverage in the Netherlands.

Babak Fouladi, Chief Technology & Digital Officer and Member of the Board of Management KPN: “For the third time in a row, KPN has been awarded Netherlands Best Mobile Network by Ookla. This shows that the renewal of our network is good for our customers and good for the Netherlands. Next to the best mobile coverage, we also offer the fastest mobile network experience in the market. With these two combined we deliver on our market promise with the best network of the Netherlands.”

Fastest 5G network
Ookla does not only look at the overall performance of the mobile network, but also specifically at 5G. KPN offers users the best 5G performance with the highest average download and upload speeds, with a median latency of 19 milliseconds**. This is important because 5G is increasingly being used for critical applications where real-time communication can be vital. Also for gamers, short response times on the network are a must.

Renewal network and increasing data traffic
Over the past two years, KPN has renewed a large part of its mobile antenna network to make it future proof. This modernization will be largely completed this year. Already more than 80% of the mobile network, which consists of more than 5000 mobile sites throughout the Netherlands, has been renewed. As a result, KPN also has the largest 5G footprint of all Dutch operators. Despite the fact that mobile data traffic increased by more than 30% last year, both download and upload speeds have increased.

About Ookla
Ookla analyzed over 340,000 tests from approximately 130,000 unique devices of users of the various Dutch mobile networks in the past six months. Then Ookla reports who is showing the fastest mobile network speeds and how the mobile coverage is doing. KPN also scored Netherlands’ Best Mobile Network in the second half of 2020, just like the first half of 2021.

**Based on analysis by Ookla® of Speedtest Intelligence® data for Q3–Q4 2021. Ookla trademarks used under license and reprinted with permission.