Some 70 percent of Dutch employees have a workplace that is still not well equipped for working from home, according to KPN's first Hybrid Working Monitor. Since working from home became the norm again in late November, digital home working traffic has increased by a third. Yet many workers are still working without an office chair, second screen or decent desk. Some also experience technical problems when working from home, for example due to an intermittent connection.

KPN's Hybrid Working Monitor, conducted among 1,000 employees with a hybrid work schedule, shows that over a quarter do not yet have an (adjustable) desk. A similar number do not have a second screen and over a fifth still do not have an office chair at home. Almost a quarter have a space problem: they do not have a suitable separate space in their home to work properly. Employees also often lack a good, stable WiFi connection (18 percent) and a fast internet connection (16 percent). Only 30 percent say that their home office is fully equipped. 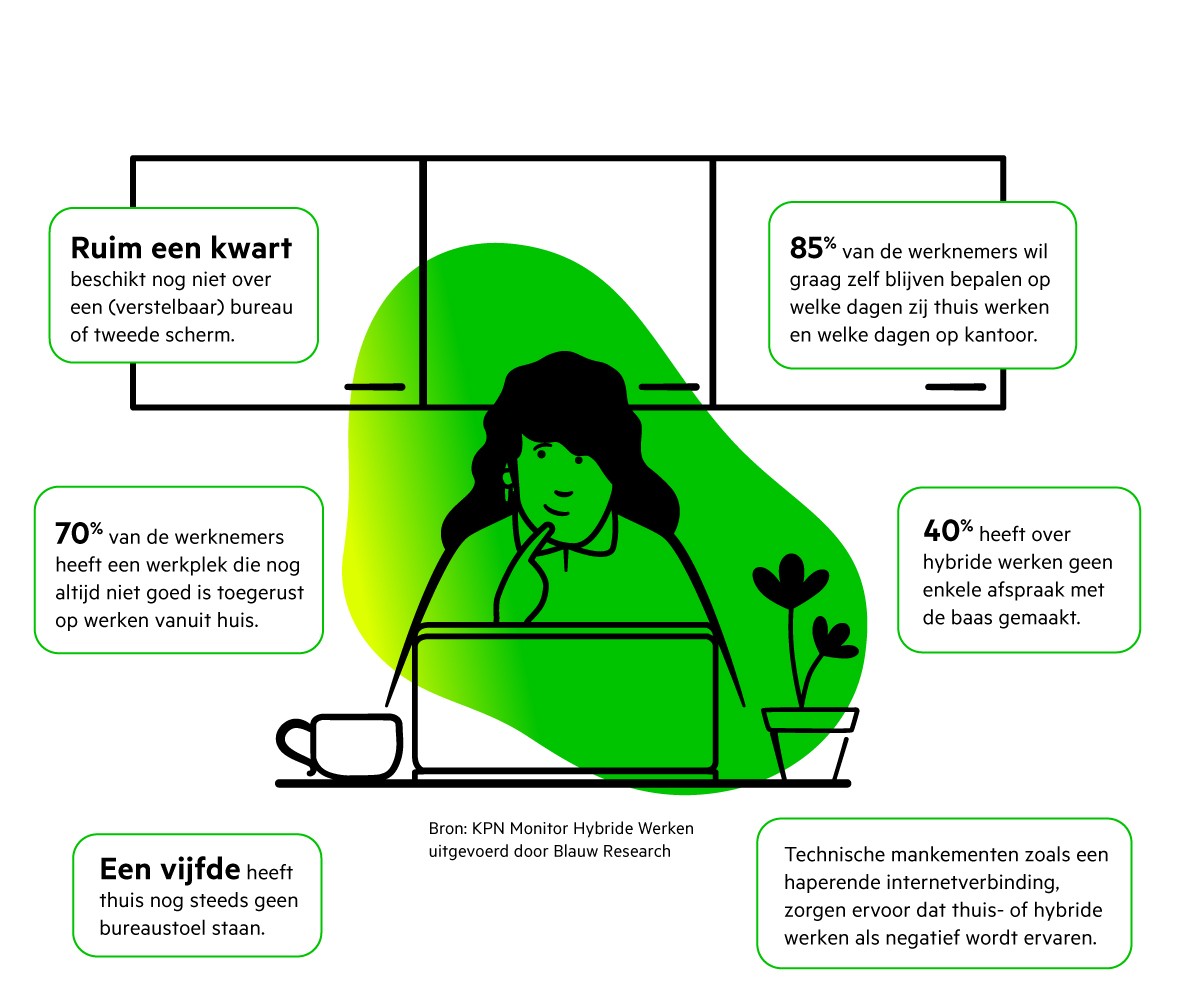 "Success of hybrid working hinges on infrastructure"
More than two-thirds say they prefer to work at home because concentration and productivity are better there. Loneliness, distraction or blurring of work-life boundaries are reasons why a minority of those surveyed prefer to work in the office. Technical problems such as an intermittent internet connection also cause a negative perception of home or hybrid working. A whopping 63 percent of people who sometimes hold hybrid meetings complain that poor internet connectivity makes meetings messy and unpleasant. Nearly 40 percent fear that technology will let them down when dialing into meetings.

"These figures are alarming," said Marieke Snoep, Director Business Market and a member of KPN's Board of Management. "We had thought that many companies would have their infrastructure in place by now, not only in the office but also in the employee's home. If we really want hybrid working to work, structural changes are needed in the physical working environment at home and at the office, in ICT and in the behavior of management and employees. After all, that's what the success of hybrid working hinges on."

Improvements achievable in the office as well
There is also room for improvement in the office. Over a third want more space so as to be able to work in silence. Over a quarter would like to see more places for making phone calls at work, and an equally large percentage would like to see more places made suitable for video calling. Of the employees who already use such video equipment, 47 percent cannot always get it to work properly. 43 percent report that they still do not have the right equipment. Only 24 percent indicate that nothing needs to happen in the office to facilitate hybrid working.

"Offices are now acquiring a different function and will be used for meeting and working together," continues Snoep. "A prerequisite for successful hybrid working is that working from home is as efficient as working in the office. Wherever people work, they count on software, hardware and a network that performs consistently and that they can use safely. Without disruptions, without failures. Moreover, the workplaces at home and in the office should merge seamlessly. With a user experience that is the same everywhere."

40 percent have no arrangements for hybrid working
Some 85 percent of employees would like to be able to decide which days they work at home and which at the office. In 59 percent of cases, arrangements have been made for that. In half the cases, a minimum number of office days has been agreed upon. In more than a third of the cases, agreement has been reached on which days it is compulsory to go in to the office. As many as 40 percent have not made any arrangements with their boss about hybrid work, but almost three-quarters have no desire to do so.

Snoep concludes by calling on employers and employees to discuss things with each other: "The first Hybrid Work Monitor shows that there is still plenty of room for improvement, so I urge employees and employers to engage in further discussion on this issue. Stay in touch about what works and what doesn't and make adjustments accordingly."

KPN is the first Dutch telecom provider to introduce the ecosim
Preview on 2022: Cybersecurity, fiber and streaming
New Year causes record data pressure on the mobile network
Records of terabytes on network of KPN in 2021
KPN receives recognition for collaboration with startups
KPN subsidiary InSpark achieves exclusive expert status Microsoft Azure
Some modules are disabled because cookies are declined. Accept cookies to experience the full functionality of this page.
ACCEPT COOKIES
We use cookies to optimize the website, no personal information is stored. Learn more
DECLINE COOKIES ACCEPT COOKIES