KPN network peaks due to streaming traffic at King’s Day

The performance by The Streamers, the supergroup of several Dutch artists, resulted in a significant increase in internet traffic on the KPN network during King’s Day. While the artists, led by Guus Meeuwis and Kraantje Pappie held a musical party together at Noordeinde Palace, KPN recorded record levels of ‘streaming traffic’. 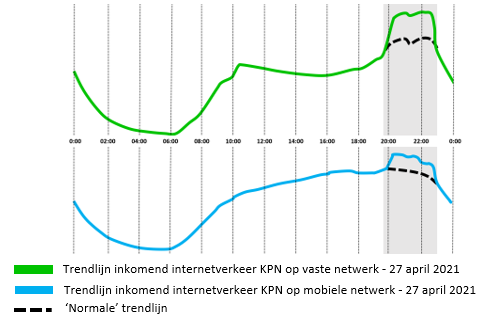 KPN saw a lot more internet traffic than usual throughout the concert. Not only did large numbers of people watch the live performance from The Hague on the fixed network, KPN also processed much more traffic on the mobile network. An increasing number of customers are choosing ‘unlimited’ packages, which makes streaming such a concert on your mobile much easier.

A clear and continuous peak is visible on both networks during the concert from The Hague. What is also striking is that the streaming concert was being searched for on the fixed network well before it started, while people only began watching and listening via the mobile network from 8 pm. It is notable that the livestream was watched to the end by large numbers, because the data volumes remained high and only dropped again after the concert.

The Netherlands clearly enjoyed this initiative en masse and the numbers of viewers exceeded 2.5 million on Tuesday evening. According to Tribe Company, the organization behind The Streamers, this makes it the most-viewed streaming event ever in the Netherlands. Something that KPN can confirm; the network of the Netherlands recorded record levels of ‘streaming traffic’.

State of the Network
In 'State of the Network', KPN publishes information on trends and topical issues that are reflected in the volume of internet traffic on the network of the Netherlands. See also previous publications about holidays and working from home in the lockdown, the impact of Covid-19 and remote working on the network, and the influence of the brief period of frost and ice in February this year.

KPN network peaks due to streaming traffic at King’s Day